Transformer taps allow the coil ratio and therefore voltage ratio to be changed. This is useful to adjust the output voltage if the input voltage differs from the nominal voltage.

In the example below, a transformer has a nominal input voltage of 480 Volts and is provided with 2.5% taps; 2 above and 4 below. 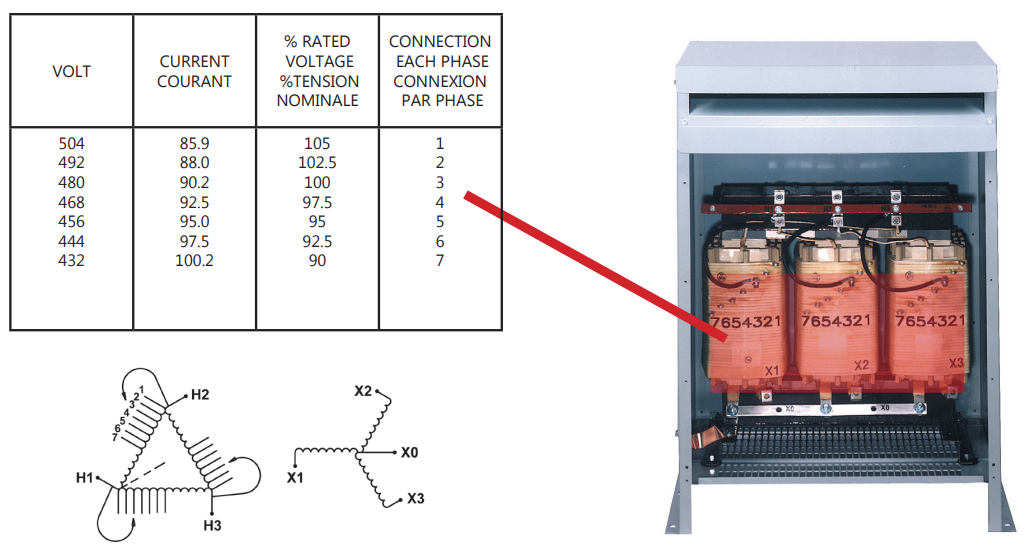 NEMA ST 20 defines the allowable tap ranges for 600 volt class transformers in tables 2-1 and 2-2 by phase and kVA. As the charts below shows, a wide range of taps are offered at each kVA except for the lower kVA’s.

A common question is: Should a specification require a standard tap range, say 2x + 2.5%, 4 x -2.5% (2FCAN, 4FCBN), for all kVA’s and voltages? In reality, transformers have differing number of coil turns to utilize taps. A 480 VAC primary essentially has twice as many turns as a 240 VAC primary.

For example, offering six sets of taps on a 240 VAC primary step up to 480 VAC secondary would most likely result in taps on the sides or back of the coil. Some users may try to back-feed a 480 VAC primary coil by using the inner lower voltage to achieve a "step-up" design, but this is discourage for a number of reasons covered in other HPS technical bulletins. As a result, it is common that transformers designed to "Step-Up" voltages will offer fewer taps as an engineering necessity.

If an application requires greater tap range than what the common taps allow, there are options including: