What is a Tap?

Take a 480 V primary to 120 V secondary single phase transformer.  Its primary winding may be wound with 80 turns for 480 V and its secondary winding will have 20 turns for 120 V.  For two 2.5% taps above and two 2.5% taps below rated in the primary, each tap will be 2 turns.  The primary coil would be wound with a total of 84 turns and have leads to remove 8 turns from the coil in 2 turn steps.  This will allow the rated primary voltage of the transformer to be adjusted to any of the following to compensate for variance in the supply voltage and have an output close to 120 V:  504 V, 492 V, 480 V, 468 V and 456 V.  This holds true for three phase transformers as well.

Larger transformers are wound with fewer turns.  The same 480 V primary to 120 V secondary single phase transformer ratio but a much larger rating may be wound with 24 turns for 480 V and 6 turns for 120 V.  Because taps must be made with complete turns, the minimum number of turns between taps would be 1 turn.  This means that for this particular transformer, tap increments cannot be any smaller than 4.17% – the industry standard 2.5% taps cannot be achieved.  If this same transformer had a primary voltage of 4160 V instead, there would be 208 primary turns and 2.5% taps could be achieved with 5 turns per tap (within the +/- 0.5% tolerance allowed on the turns ratio).

If the turns removed are at the end of the coil, the nameplate diagram will look similar to the high voltage winding in diagram SCD 9, shown in Figure 1 with the tap jumpers highlighted.   One end of the tap jumper is fixed to the line terminal and the other end is connected to the appropriate tap on the coil.  This is a non-bridging tap arrangement. 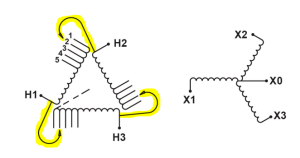 If the turns are removed from the middle of the coil, the nameplate diagram will look similar to the high voltage winding diagram in SCD 10, shown in Figure 2 with the tap jumpers highlighted. 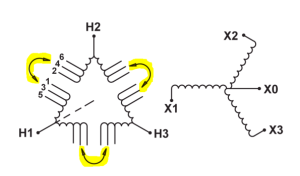 Transformers are shipped from the factory in the 100% tap connection.  If the tap connection needs to be changed, consult the transformer nameplate for the proper connections.  It is important that all coils be set to the same tap position.  If the coils are wound with two halves connected in parallel, it is important that both halves have the same connection as well (the nameplate will usually indicate this).  Because the transformer must be de-energized to change taps, the choice of tap is based on the long term normal operating voltage of the primary, not compensating for short term fluctuations. 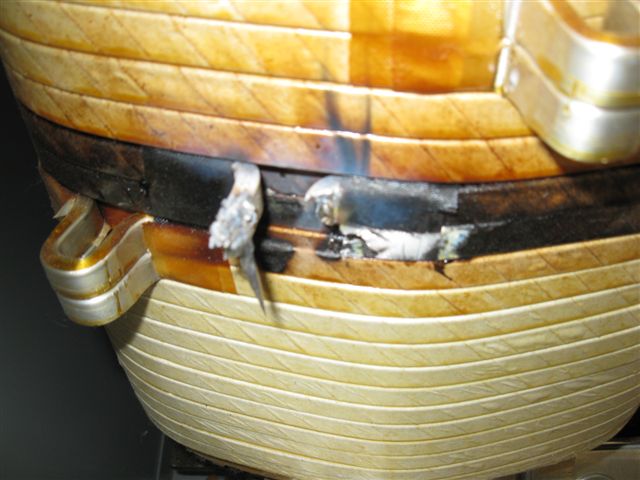 Eye loop taps, found on many 1.2kV class products, require special precautions when changing the taps. They are made by forming a loop of the wire in the winding rather than attaching a pad to the coil.  All tap loops other than the 100% tap loops have not been cleaned of insulation or resin at the factory, so it is necessary to clean the loops being used.  Remove only the insulation and oxidation, leaving a flat surface for the lug to sit on.  Be careful not to remove the metal itself as this is the winding conductor.  If the winding is wound with one conductor, one tap jumper is provided per coil and is to be attached to the top of the eye loop.  If the winding is wound with two conductors, two tap jumpers are provided.  One must be attached to the top and the other must be attached to the bottom – never put both jumpers on the top or bottom only.  Figure 3 illustrates what happens when the two jumpers are connected to the top only – note the middle eye loop has completely blown off.

The instruction manuals are being updated to show this.  For older production, a tinned brass washer is inserted between the lug and the eye loop – a steel washer here is not acceptable.  This is illustrated in Figures 5 and 6. 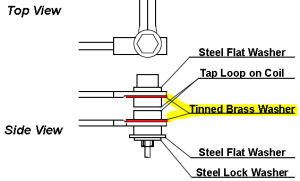 For medium voltage transformers above 1.2 kV class, clearance must be provided between the tap jumper cable and other live parts, especially for transformers above 7500 V.  The cable insulation is sufficient for contact with live parts of the tap area of the coil it is connected to.  The cable insulation may not be adequate for contact with phase or line conductors or ground.

The preceding discussion is general in nature regarding the standard tap offering.  Other tap options are also available – consult the factory for these.  Always consult the transformer nameplate for tap information specific to a particular transformer.