The name “Line Reactor” immediately brings to mind that this inductive device is used on the line (input) side of the VFD. However, that same or de-rated line reactor can often be used on the load (output) side of a VFD as it delivers power to the motor.

First, we have to understand that the output of a variable frequency drive (VFD) is not a sine wave but series of square DC pulses of varying width. Typically, there are 2,000 to 20,000 of these pulses a second. By controlling the width of these pulses the VFD can simulate a wide variety of frequencies to vary the motor’s speed. This Pulse Width Modulated (PWM) signal can cause some issues with the system including:

Representation of a VFD PWM output and how it simulates a sine wave.

Typically, a 5%-line reactor or higher or a dV/dT filter is installed close the output of the VFD to help mitigate these issues. Some manufacturers will de-rate an input line reactor or have a separate part number to be used on the VFD load side due to higher heating. Hammond Power Solution’s Centurion CRX line reactors can be used on both the line and load side of a VFD without de-rating.

The installation of load reactors or dV/dT filters at the VFD output can help reduce the quick rise time at the edges of the VFD’s PWM DC square waves. This “rounding off” the square wave increases the dV/dT and better recreates a sine wave at the motor. This causes an overall improvement in efficiency and potentially lowering of the motor’s temperature rise by 10 to 20oC which also increases the motors Mean Time Between Failures (MTBF). In addition, the PWM DC square waves can cause a higher pitched audible whine in a motor. Adding an output line reactor can reduce the audible motor noise by 3 dB or more.

VFD manufactures will typically designate a cable length between the VFD and motor that if exceeded, a reflected wave phenomenon may occur. In this instance, the output voltage of the VFD can be multiplied by either two or four times the base DC bus voltage. The based DC bus voltage at 480 VAC is about 670-690 volts so the motor windings could see spikes 2 or 4 times higher. This typically occurs somewhere in the motor windings or cable run. If this occurs, it typically manifests itself as:

The high voltage charge escapes the winding’s insulation but often does not cause immediate insulation failure.One of the most likely paths to ground for the charge is through the windings, across the bearings and through the motor shaft to the grounded machinery.The arcing through the lubricant on the motor bearings causes tiny pits to form.When enough pits form, bearing failure will occur. 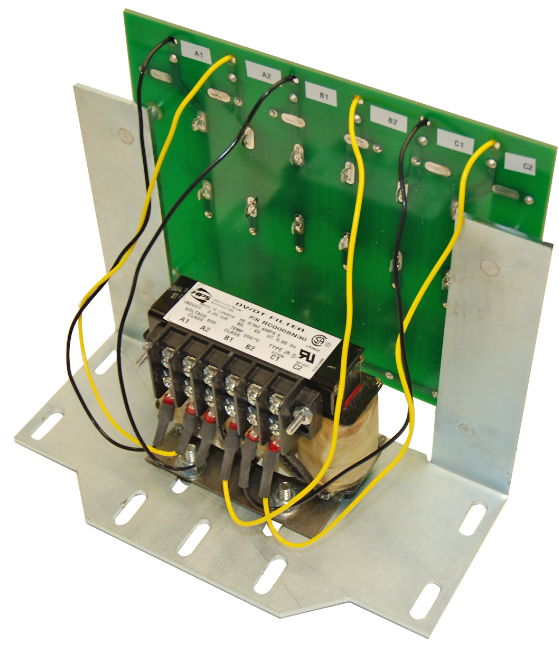 While a line reactor may also help mitigate the issue, a dV/dT filter will better lower the top voltage of the reflected wave, especially at longer lead lengths. If using a line reactor, a minimum of 5% is recommended, higher impedances can be achieved by wiring two reactors in series. Reactors are recommended for lead lengths up to 500 feet. Typically adding a dV/dT filter to the output of a VFD will increase the rise time of the edge of the DC pulses and mitigate issues with reflected waves. A dV/dT filter combines a reactor with an RC filter board that acts as a snubber circuit. If the VFD to motor distances exceeds 1000 feet, other technologies such as sine wave filters may need to be considered.