Determine Primary Side of Transformer in Solar PV Applications 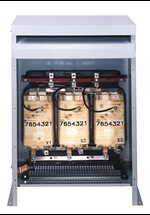 Hammond Power Solutions’ transformers are intended to be energized on the side indicated as primary. This allows proper control of energizing inrush currents.

A Wye-N with a neutral connected to the facility/utility grid can result in circulating currents through the neutral and transformer overheating. This occurs most often when the PV array is not generating, but there may still be heavy single-phase loads at facility.

HPS can provide transformers with any combination of delta, wye and wye-N connections on either the primary or secondary. This technical paper largely describes utility-interactive systems only. Systems that have no utility connection or can switch out utility connections require additional considerations.

Identifying Primary on a Nameplate: